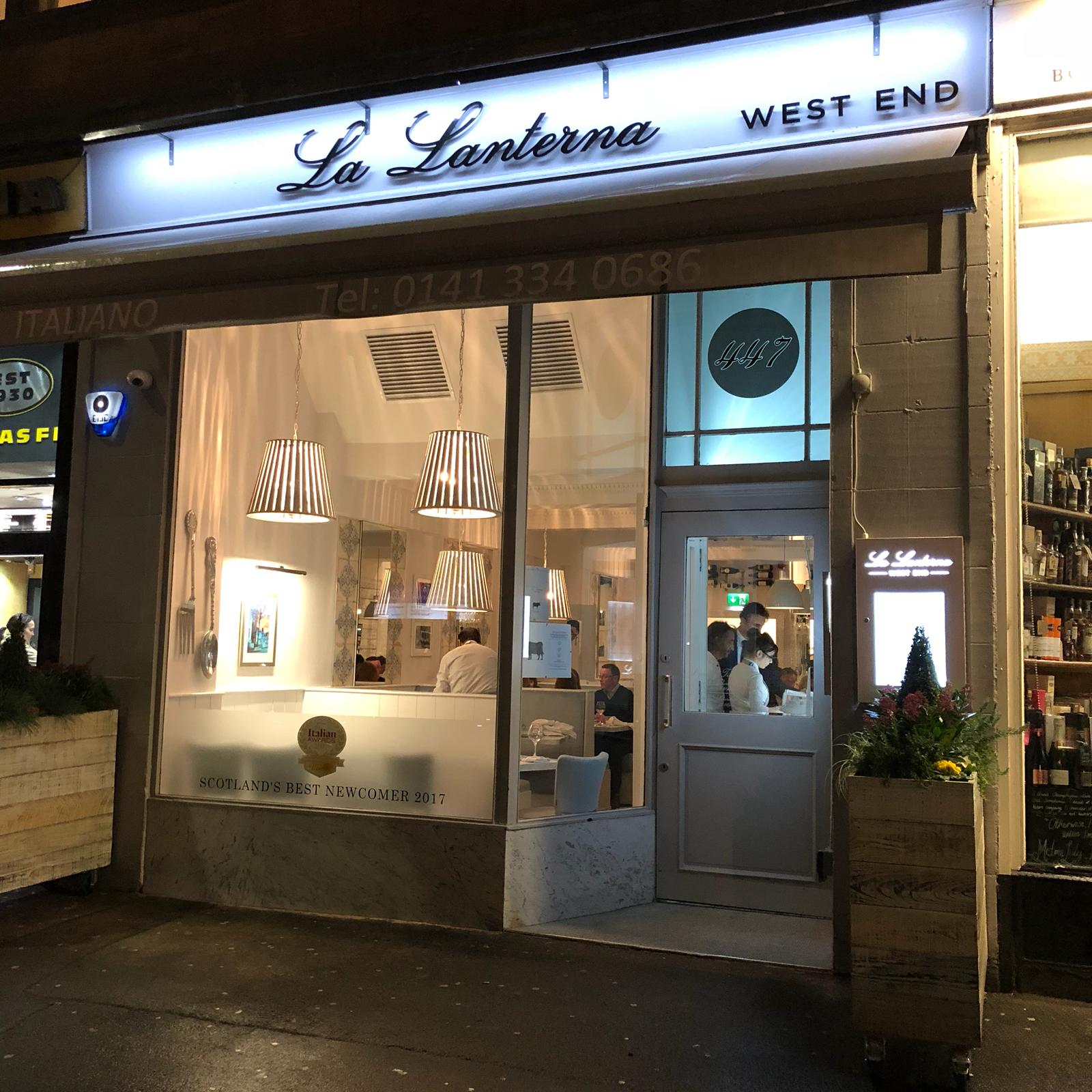 With  these immortal words of the rat pack crooner Dean Martin ringing in the ears, The Foodwala family we arrived at this beautiful Portofino inspired restaurant, the cool sky inspired Azure and the white colour scheme was typical northern Italy  good taste, It felt as we were in Piazza dell’Olivetta in Portofino overlooking the superyacht marina, just as the sun is setting and all the beautiful people are out for a stroll before dinner.

I found that hushed tones at the restaurant reminiscent of the calm stillness only found in places of great wealth and sophistication like in Portofino and also overlooking the Bay in Monaco. 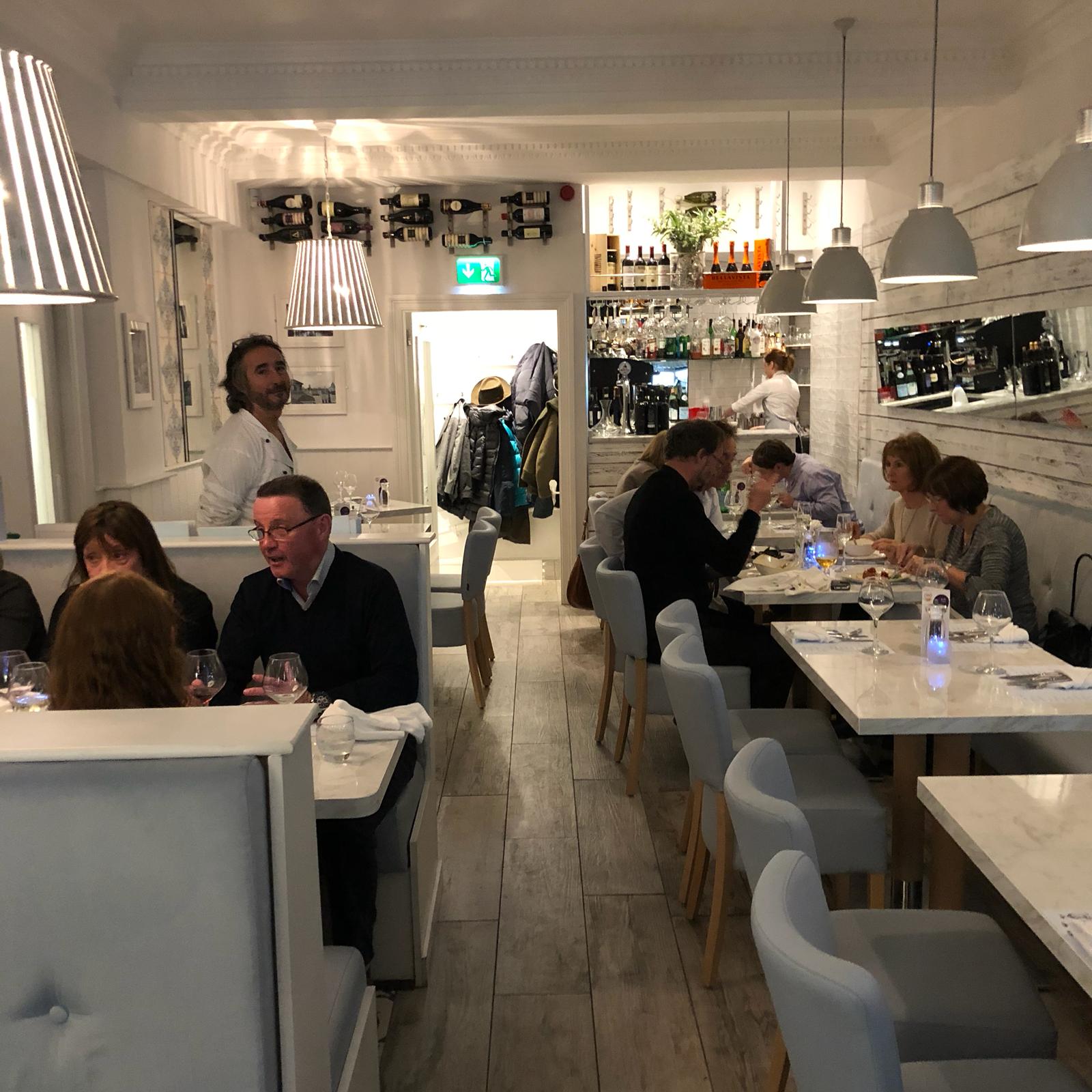 La Lanterna is the second outpost of the Legendary restaurant in Hope Street, first opened in 1970 and now run by two brothers Chris and Luca, this is a growing trend of legacy restaurants and delis opening the second outlets in the cosmopolitan West End, with the amazing Eusebi’s leading the pack and  Celinos following on in Partick. 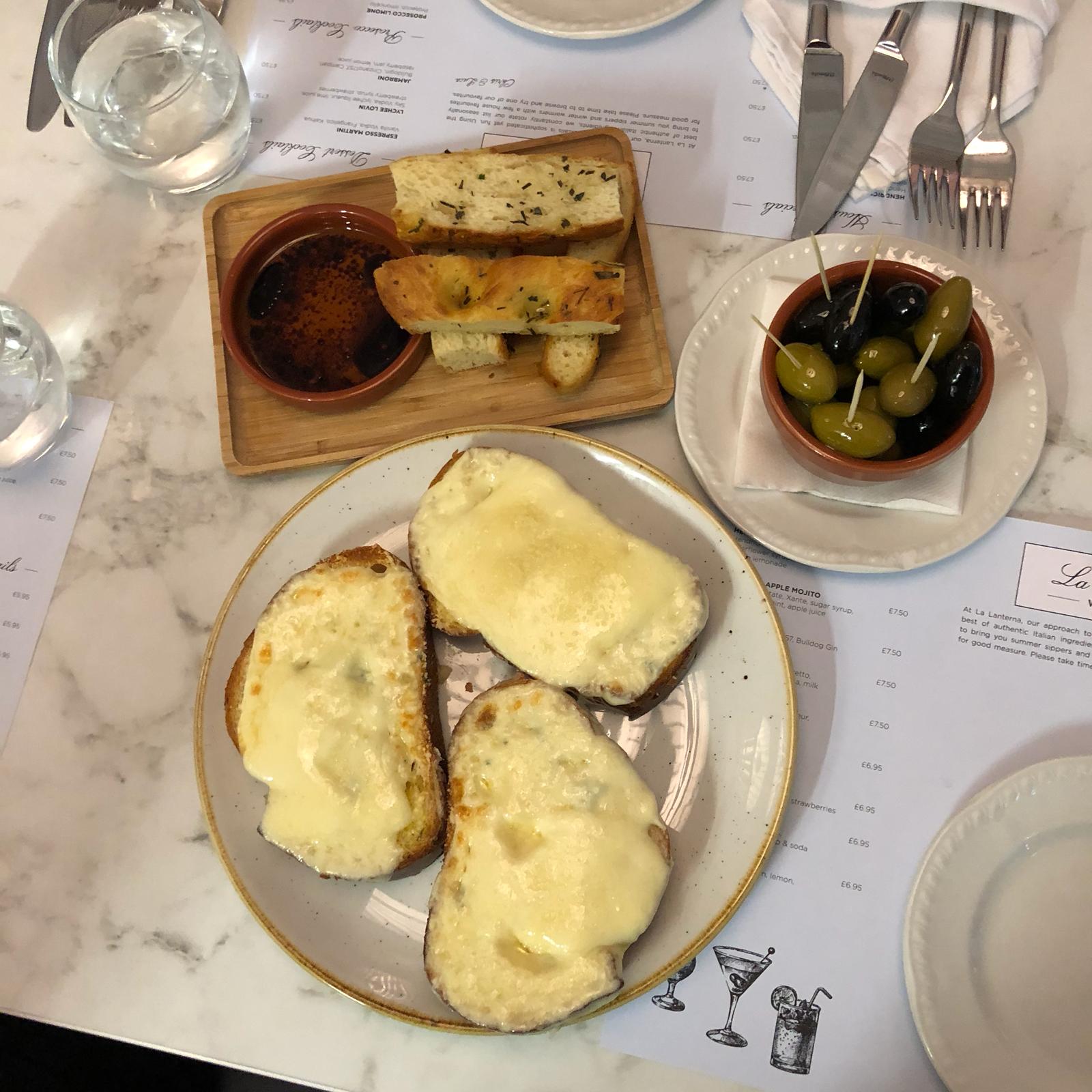 We kicked off the proceedings with some tasty Stuzzichini, we shared some delicious homemade Focaccia with Olive Oil and Modena balsamic vinegar, Pam al Aglio con Mozzarella, and some Apulian Cerignola Black and Green Olives. 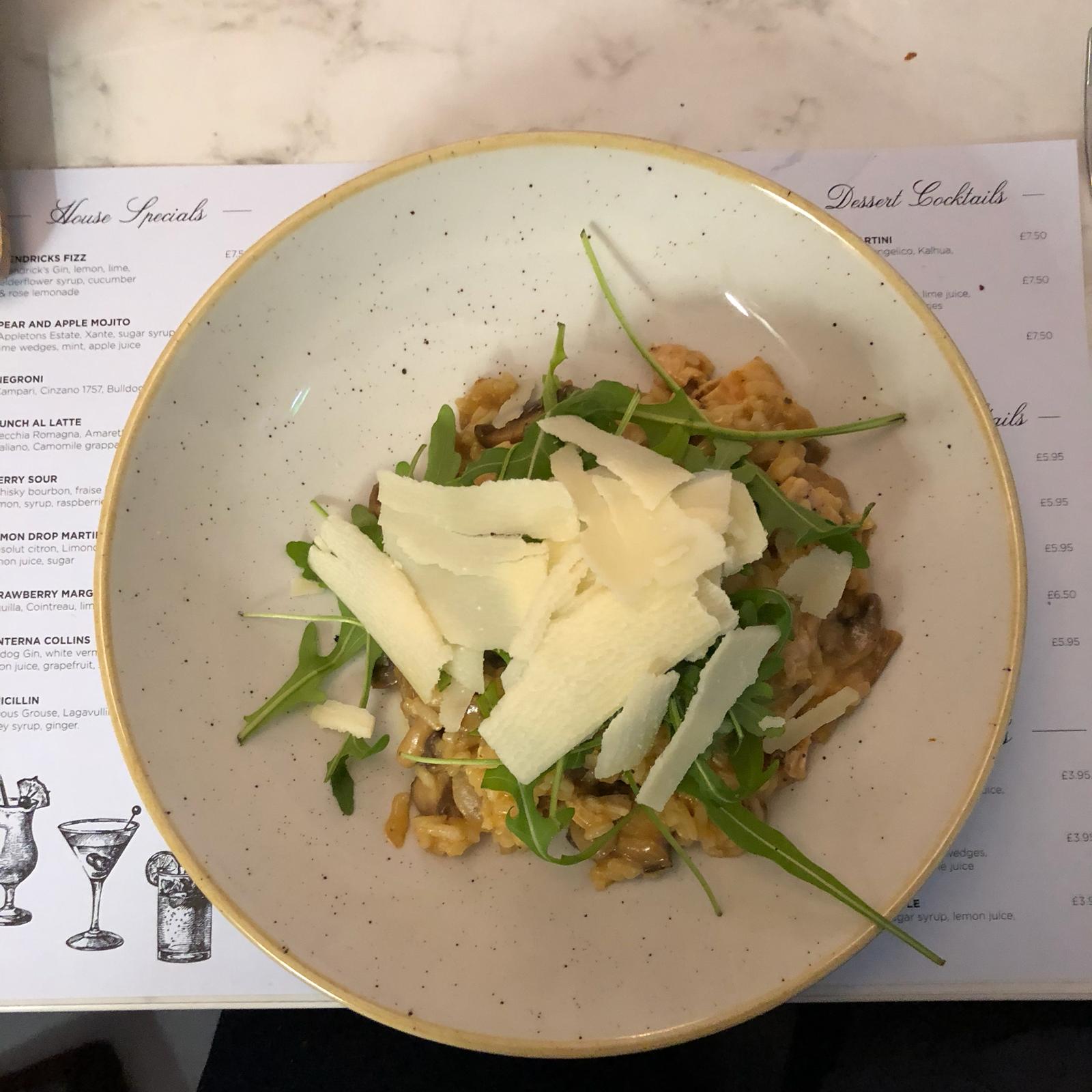 As you might be aware I am a big time rice aficionardo and I went for the Milanese Pollo Risotto, Legend has it that the Moors introduced the risotto when they liberated the islands of Sicily and a Franciscan monk added the Spanish Saffron to the Risotto as a wedding gift for the daughter of the Doge of Milan in the 18th Century.

The Risotto was delicious, the arborio rice was perfectly al dente and the creamy consistency was just as we had in Portofino. 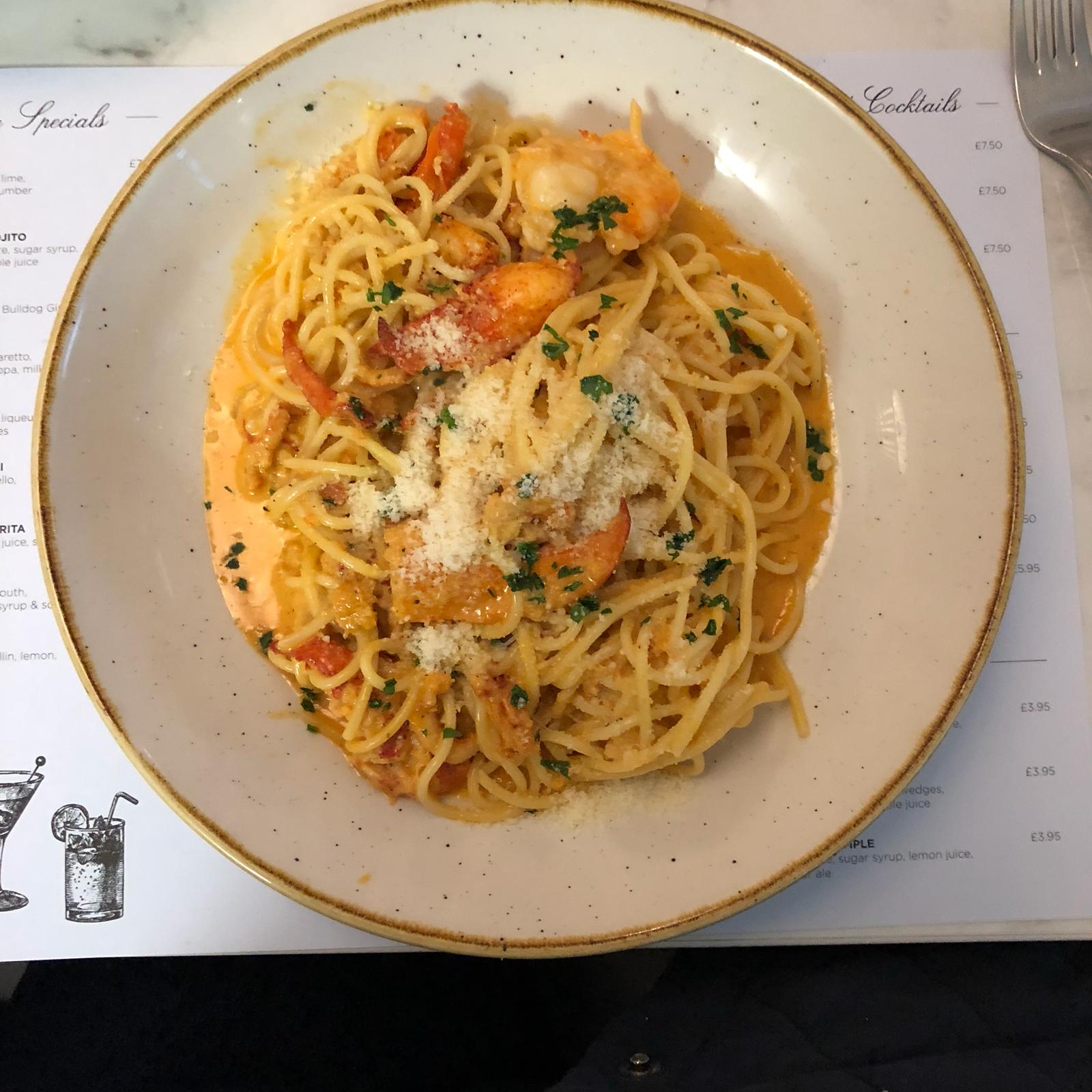 Mokee Foodwala opted for the Spaghetti Arogosta, it was a fitting ode to the great seafaring tradition of Portofino, plump king prawns, lobster tail and cream jus tossed on artisan handmade Spaghetti, again on point. 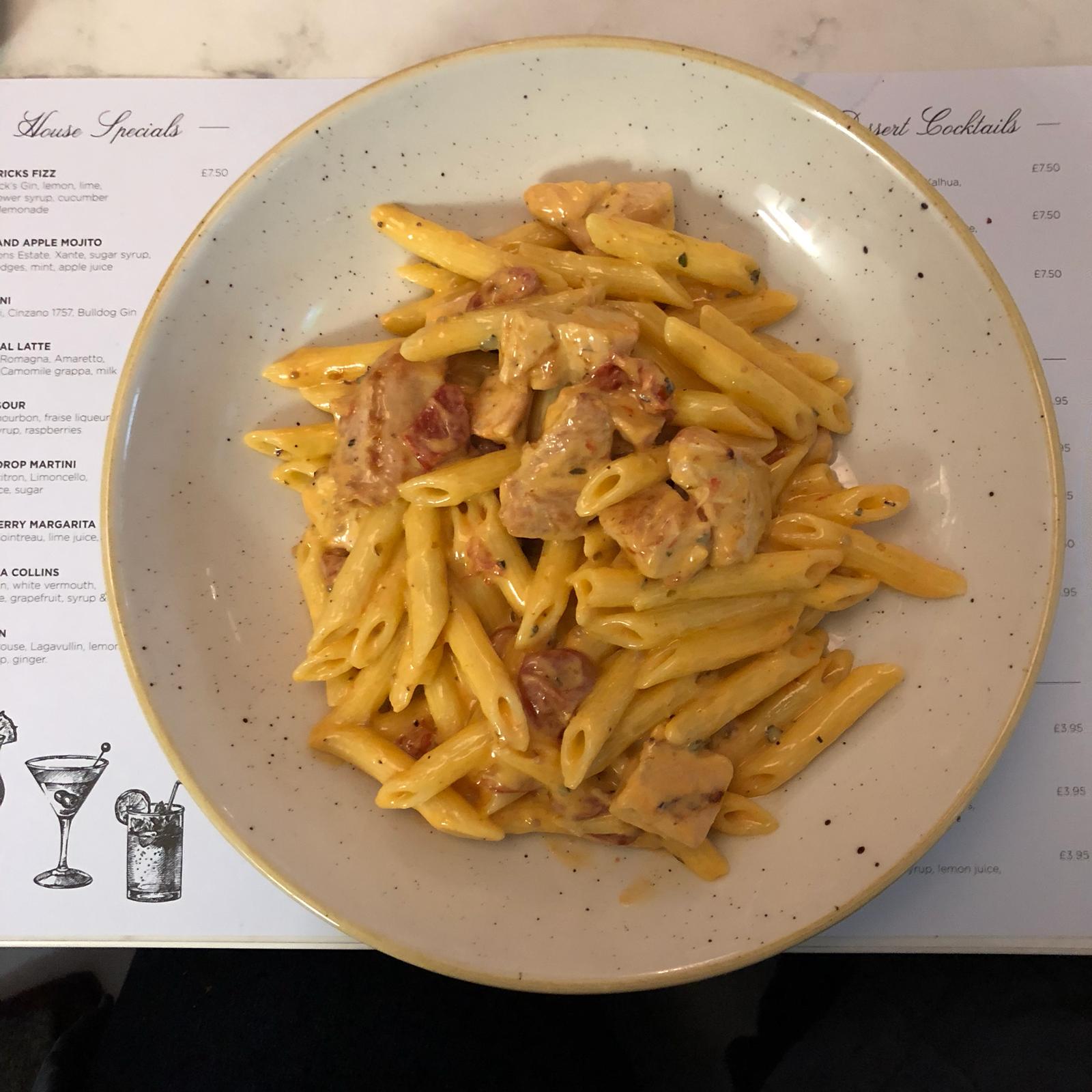 The Penne Pollo was again cooked to Al dente and roast chicken and sun blushed tomatoes were added liberally to give a delicious creamy but light dish.

In Conclusion, La Lanterna was delicious, the master chef was a true artist, he knew that a masterpiece can be created with the simplest of ingredients and with the deftest of touch.

our taste buds were singing Mozarts The marriage of Figaro, Duettino Sullaria.

The Service was equally on point, Italian waiters with genuine smiles, attentive service without being obtrusive, and Jacamo accommodated our halal chicken request with aplomb.

Halal – No (but halal chicken ordered especially for us)