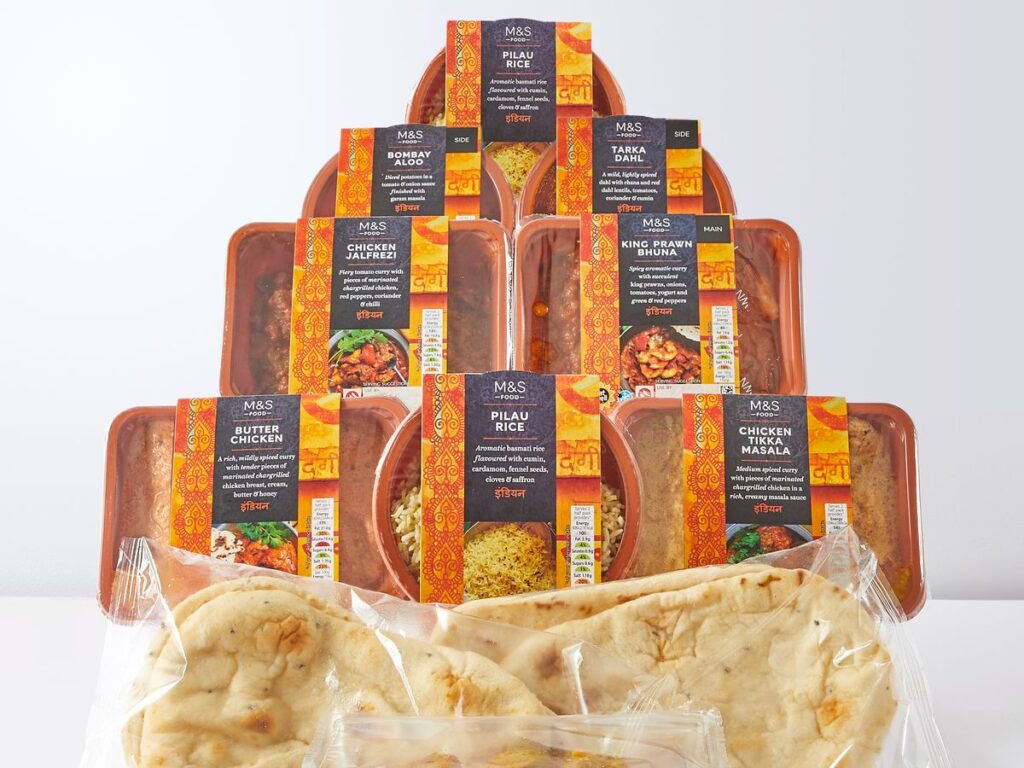 Hey, Foodwala’s boys and girls…hope you are all safe and well.

As you will have gathered, we are under the second lockdown and all restaurants are closed unless you are doing takeaway service.

Last week was the 22nd National Curry Week, which went away largely unnoticed by the Indian and Pakistani restaurants, possibly they were too busy trying to survive rather than taking notice of the patronising PR walla’s

The loudest shouting National Curry Weeks participants were M&S and they were extolling the virtues of their “authentic M&S Indian Food” this got me a little curious.

I decided to review the M&S Indian range and see how well they stack up in the taste department.

Obviously, M&S Indian Food cannot compare with the stalwarts of the Indian Restaurant scene, like the Shish Mahal  or Mother India, however, I devised a scoring algorithm that would take into factors like

In the interest of fairness and impartiality, the algorithm would essentially give M&S Indian Food a “head start” and secondly the chef will present the M&S food in authentic karahis and reheated according to the instruction on the back of the packets, and we made identical “control” dishes so they were blind tasted for impartiality.

This would mean that when the panel and I taste it, it will be as fair and balanced as possible.

We kicked off the proceedings with some starters

Firstly, the Onion Bhajis were seasoned adequately, however, the basin(chickpea batter) was still raw  and stodgy and the onion filling was mushy… 2 out of 10

The Sweet Potato and Onion Bhajis was the same story, I had to read the label to notice there was sweet potato in it 2 out of 10

Lets Start with the Veg Samosa, the filling was negligible, we could not identify the veg, secondly, the pastry shell was so soggy it was falling apart, I suspect the oil had infiltrated the pastry shell in the initial cooking in the factory 1 out of 10

The Veg pakora was however seasoned better and the veg content was more decipherable, 3 out of 10

Next Up, we moved on to the mains

the mains were accompanied with  nan bread

The two nan bread were poles apart, one was undercooked and stodgy, with just a bready flavour, the other was a bit too well done with the same dense stodgy flavour 2 out of 10

The pilao rice was under  seasoned and a bit too al dente to be al dente,  3 out of 10

The Sagg Aloo was truly offensive, the slimy off green sludge on top of

the diced potatoes were supposed to be spinach, horrible 0 out of 10

The Tarka Dahl, the dahl in question was Chana and orange lentils, however, it was just lentils in gravy, no tarka (roasted spices) to be found 3 out of 10

The Chicken Tikka Masala. originally created by Mr. Ali at the Shish Mahal. This version was anything just chicken in a wee bit spiced creamy sauce, no nuance or seasoning. 2 out of 10

This was described as King Prawns in a sweet and sour sauce, firstly there were no King Prawns (6/8 +) rather it was size 51/60 prawns on a creamy and mustard seed sauce, not wholly disagreeable 4 out of 10

The Chicken Korma was…. boring, chicken breast in cream…no redeemable feature 1 out of 10

In conclusion, The M&S taste test was done as scientifically and fairly as possible, however, what we deduced was if you wanted an urgent lockdown curry fix, please call your local restaurant for a takeaway, we could not recommend substituting the M&S meal for an authentic meal made in a restaurant.

At an absolute stretch? possibly the King Prawn Chettinad

Everything else, particularly the “Sagg aloo”

So how did M&S  do against its peers?

Keep an eye out for future reviews from Waitrose, Asda, Tesco, and Iceland.

The Chicken was NOT Halal

Alfie Foodwala visits all restaurants anonymously and pays for the bill like any other customer, Alfie Foodwala does not except free meals in return for meals

All reviews are the personal opinion of Alfie Foodwala based on his 30-year experience as a restauranteur.