Hey, Foodwala boys and girls…hope you are all safe and well.

Furthermore is you know of a restaurant that I should review please let me know. 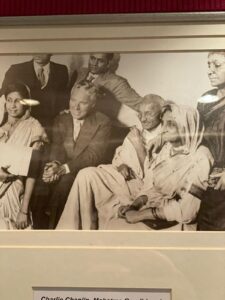 Hey Guys…. truth can be stranger than fiction, as they say

“you cannot make this up”

So apparently in the 1920’s the resistance movement against the Englisher colonial rule was being conducted by the Indian resistance led by Mohammed Ali Jinnah and Mahatma Gandhi.

The resistance was being carried out in London as well as India.

The urbane and charismatic barrister turned resistance leader Jinnah was in charge of recruiting sympathetic public figures in the United Kingdom to further the non-violent agenda of the independence movement.

Jinnah would recruit and meet the supporters in secret, Mr. Jinnah is an affluent barrister as well as a dapper young man who stayed in Mayfair, as he wanted to stay close to home and his supporters and he did not want to cramp his style so he would arrange recruitment drives in various locations in Mayfair.

He would hold decadent parties where the who’s who of the English social establishment were invited and from there Jinnah and his band of subversives and Indian Princes would recruit.

One of the venues for the recruitment parties was the Claridges Hotel in Mayfair, Mr. Jinnah’s parties were the talk of the town and he would hold court in his Saville Row tuxedos.

One unlikely recruit from the party was one Sir Charles Spencer Chaplin, or as me and you know him…Charlie Chaplin!

Mr. Chaplin was a vocal supporter of the Indian independence movement and used his stature as the leading film star of his time to spearhead the agenda.

Mr. Jinnah being sophisticated and clever

discovered the best recruits came from the world of showbiz and media, as they would then carry out the PR required for the independence movement.

After recruitment the resistance movement would meet in clandestine at the then newly opened Veeraswamy restaurant in Regent Street, this venue was chosen as the owner was sympathetic to the cause and apparently, Charlie Chaplin was a descendant of Indians and loved his Indian food, his particular favorite was Lamb Rogan Josh!

This amazing story of Spies and the resistance movement got me wanting to visit the Veeraswamy as well, who had just won its first Michelin star.

The restaurant had recently been refurbished during the lockdown to celebrate the Michelin Star, I particularly loved the quirky display of turbans as wall art and the coloured glass jars as lights, very creative.

We kicked off the proceedings with this wonderfully quirky Dahl and Saib shorba ( yellow lentil and apple soup) it was a playful concoction of earth-spiced lentils and fresh green apple, imaginative and delicious…definitely a great start.

Since I chose the tasting menu, the chef brought out his greatest repertoire, so this was Tiger Prawns with Mint, Corriander, and Chilli. Tiger Prawns are notoriously difficult to get right, cook too little they become soft and mushy, cook too much they become chewy and inedible.

This was en pointe, well marinaded with the hand-ground mint, chili and coriander paste, the masala complimented the delicate prawns rather than overpower.

The boti used chicken thigh to great aplomb, the nutty masala was delicately placed on top and pan-cooked to give tender but flavorsome tasting notes.

Next up was the thali consisting of  the Lamb Rogan Josh

The Lamb Rogan Josh was rich, pungent, and fragrant, with the right blend of masala, the lamb was tender and cooked until it fell apart on touching with the fork

The butter chicken was mild with a little spicy kick, the spicy kick was more of distant memory after the mildness, the chicken again was cooked to perfection.

The prawn Moilee, paid its due to its Bengal heritage, with tasting notes of cream, mustard and maithee it was smooth and flavorsome.

The Pineapple Quorma was not to my liking, overly sweet and cloyingly clingy to the palate, I would definitely have given it a miss.

Dessert was the Sojee Halva tart, Halva is a reduction of semolina boiled with milk, almonds, sugar, butter, and cardamom on a tart base.

It was good, but not amazing, the halva did not lend itself to being a tart however the sorbet helped cut the sweet halva.

I loved the veeraswamy, being a legacy restaurant it did not rest on its laurels, the decor was fresh quirky, and playful and that translated down to its food.

The Michelin Star did not make the food or service stuffy and overbearing.

The service was friendly and efficient

I would make the trip to Veerasweamy for the Lamb Rogan Josh.

I would definitely give the Pineapple concoction a miss.