Hey, Foodwala’s… another tale of the trials and escapades of Alfie Foodwala and on this occasion Shai Foodwala.

The other day I was perusing the local bookwala, and I stumbled upon a book called the Art of Flavour by Danial Paterson, I was much intrigued with this tome so I took it off the shelf, dusted it down and expectantly opened it up, the blurb in the ketab said…

“science of cooking from an olfactory and culinary perspective”

It got me thing… particularly about the past… (cue the wavey blurry thing on TV to show the past), I was on my grandfather’s plantation in the deepest darkest Punjab and we were having lunch under the trees and enjoying the gentle breeze.

We got into his ancient Land Rover and we set off into the plantation, we first arrived at the mango plantation, it was harvest time and we got out and went to the first mango tree and took off the large plump perfectly ripe Sindrie mango,  he cut a slice and we silently eat it, it was the sweetest mango I had tasted , my grandfather explained the different nuances in the sweetness.

Next up was the lemon grove, we did the same thing and again my grandfather explained the sour flavor, I was enthralled by his knowledge and the way he explained.

Further, into the plantation, we came across Oranges which were 12 weeks from harvest and still green, my grandfather cut a tiny slice and told me to gently lick the orange flesh with the tip of my tongue, it was the bitterest thing I have ever tasted, even more than when you accidentally bite into a paracetamol tablet!!

My young tongue was smarting from the bitterness so with a gentle chuckle he took out some salted peanuts and gave me them to offset the bitterness.

Eventually, we reached the outbuilding on the periphery of the vast estate and some of the labourers were having their lunch, my grandfather sat down at the table with his men and joined in, they were eating a humble meal of Palak Paneer with chapati, at the table my grandfather explained that the savoury taste was actually called Umami.

On that day I learned about flavour profiles just by hanging with my grandfather and spending the day on the farm and eating the most delicious, organic and natural produce.

This week we went to Fatt Pundit in Soho, who boasted the fusion of East Indian and Chinese flavours

Here we go, first up was the Crackling spinach chat, I tried this for the first time and it was delicious fresh spinach leaves, flash cooked in oil and then topped with yogurt, chat masala and pomegranate, the result was a feather-light chat with an amazing flavour profile.

To be honest I  have not come across crackling spinach before so I was very pleasantly surprised.

You learn something new every day. 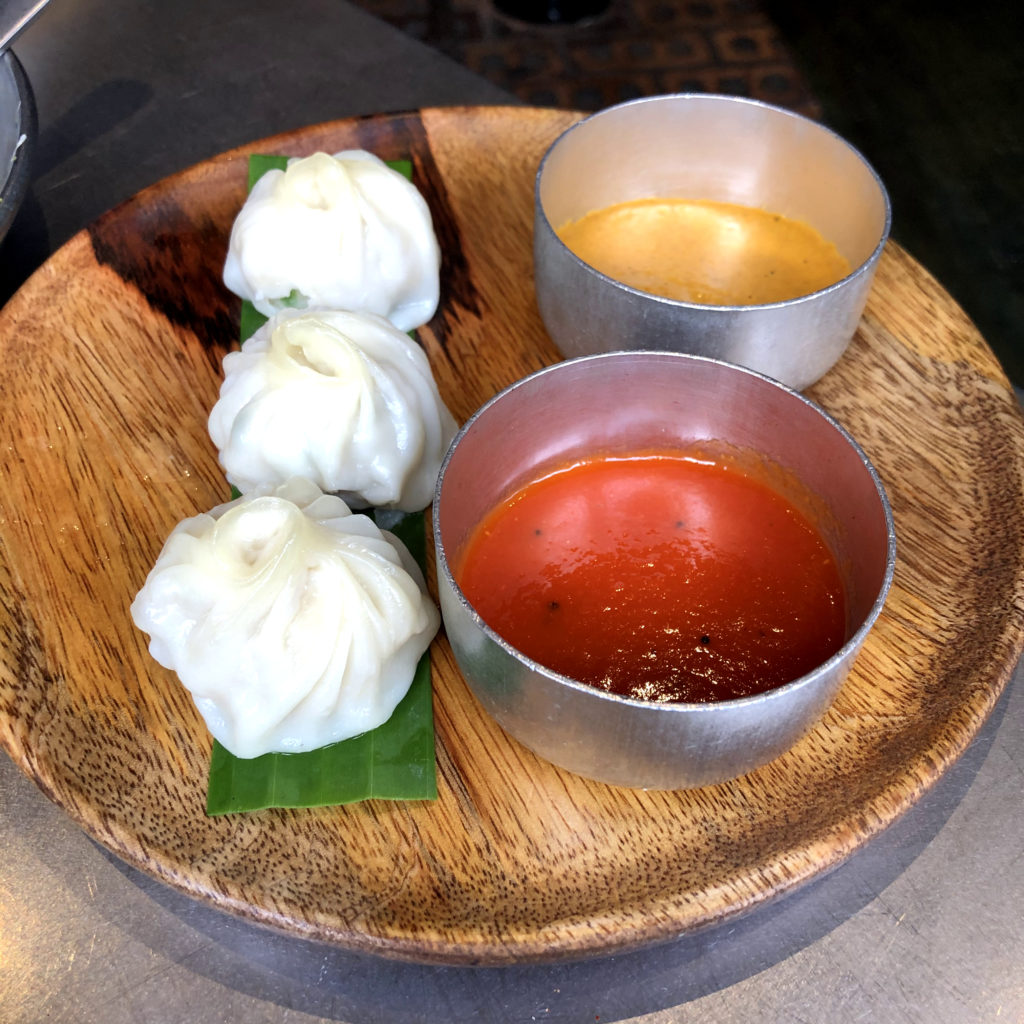 The chicken momo was lovely and moist and when you bit down the momo exploded with a delicious rush of chicken and its juice,

Since the Kid Goat Momo was not halal, I was reliably by Shai Foodwala that it too was sensitive, moist and delicious.

The momos were the exact opposite of the momo I tasted in Soho Wala last week.

This victorian looking contraption is where the momos are steamed.

The Chicken Kolkata was chicken shredded with copious amounts of fiery chili and garlic, the resulting flavors was amazing not too hot but hot enough, the garlic notes were prominent without leaving a bitterness.

Chinese style stir-fried King Prawns with Szechuan masalas. Again the King Prawns were cooked en point and the fiery Szechuan spices gave a nice kick, all in all wonderful.

Since West Bengal is allowed to consume beef this dish is a rarity in India, however, the beef was stirfried in cashews and chillis giving some serious Kung Po vibes, again could not fault it.

We washed all the fiery masalas down with this delicious Guava Sour Mocktail, whereas Shai Foodwala had the full-fat alcoholic version.

I loved the Fatt Pundit, the food was true and fiery, the Momos were moist and the curry was flavorsome.

It definitely reminded me of the Chinese we used to have in Faislabad when we were growing up.

The service was cheerful, knowlagable and efficient.

The only downside was that it was “tapas” style sharing dishes but it was very expensive, we left with a £100 hole in the wallet.

Chicken and Lamb were certified Halal by the management.

Kid Goat is not halal