Hey, Foodwala’s… Welcome to another tale of the gastronomic trials and tribulations of Alfie Foodwala.

As you well know I am a passionate walla, I am passionate about restaurants, Cars, and movies.

As an 80’s child, I grew up watching Spaghetti Westerns on the VHS video cassette with my Chacha Foodwala. I used to look forward to Wednesdays when my uncle would be off and we would watch Clint Eastwood do his silent hero thing or Lee Van Kleef doing his squinty-eyed stare.

Our favorite was a Fist Full Of Dollars, and my favorite scene was when our steely-eyed hero  Cline Eastwood walks into the dusty town square and squares up to the oily baddies.

The boss baddiewala takes exception to Clint raining on his and his baddie pals parade and shoots Clint in the heart… like what the hell!!!

But Clint staggers but gets up, the baddiewala shoots him again, and he gets up again, he does that six times and Clint gets up seven times, so the old baddiewala is a little perturbed, to say the least. Not only that, he is losing face in front of his posse and that is itself is big-time baistee (embarrassment)

while all this is going on the tension is ratcheted up by the Ennio Morricone’s mournful music…. absolutely seminal.

We used to rewind this scene and watch it again and again.

Furthermore, this climactic scene further ingrained the sense of right and wrong and justice in me, more than lectures from school teachers and elders, who said movies were not educational.

As a fan of Spaghetti Westerns, I was over the moon when Sugo Pasta opened up. 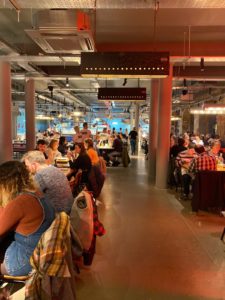 We placed our pasta order with our friendly Italian waiter, and while the freshly cooked pasta was prepared we kicked off the proceedings with some sourdough bread dipped with Olive Oil and balsamic vinegar, and Spicy Cannelini beans, the bread was delicious and chewy.

The Cannelini went well with the sun-dried tomatoes and the bread.

Next up was the pesto Tagliolini, Tagliolini is a thin version of Tagliteli

The Pasta Tagliolini was absolutely delicious, the creamy pesto with potatoes and green beans was a revelation, the pasta was cooked al dente and the pesto sauce was a masterpiece.

The Ravioli was fabulous, little pillows of cheesy spinach with a thin pasta casing, the hot sage butter was poured over the ravioli.

It was outstandingly delicious in its simplicity.

In other words, Margherita Pasta, but I am not doing it justice, the Tomato Sauce (Sugo) was tangily sweet with a hue of fresh olive oil (Evoo), simple and again delicious, the Rigatoni was lovely and chewy.

The squid ink spaghetti was subtle yet bursting with flavour, the baby squid ragu was wonderfully crafted with sun-dried tomatoes and evoo, the Lemon pangrattato is basically lemon-infused breadcrumbs.

Overall the dish had a very subtle flavour of the sea but no one ingredient was overpowering.

This was the simplest dish on the menu, it had a slight hint of chill

The pasta at Sugo was simply delicious, the menu was innovative and highlighted each area of Italy, each dish was executed with care and finesse

The service was efficient and friendly. The waiter was Italian and added to the enjoyment of the experience, the chefs were also Italian.

In my opinion, Sugo was above excellent, yet slightly behind the superstar pasta restaurants likes of  Padella in Borough Market, London   and Enoteca de Luca in Old Street London and Officina 00

The Beef is  certified NOT HALAL,