Furthermore, if you know of a restaurant that I should review please let me know.

“The party of the century”

As you might know, Eid has just passed and as usual, we all over-indulged after the blessed month of Ramadhan, We spend time with loved ones and enjoyed a huge range of delicious dishes.

We all love a party, we spend time with friends and family, eat good food and generally, a great time is to be had.

But where was the greatest party of all time, was it thrown by a  Roman emperor? or King Solomon? or was it Queen Cleopatra at her inauguration?

Well actually the answer is quite surprising, The party of the century was actually thrown by the Shah of Iran to celebrate 2500 years of the Persian empire, a new city was constructed in the Persian desert, everything was constructed by French artisans and even the food was flown in from France, however, oddly enough no Iranian person was invited and the Shah did not even invite his ministers.

Not surprisingly, that did not sit well with the Iranians, and the small matter that it cost a mere $250m meant that the Shah’s card was marked by Messers Khomani and co.

That brings us to Saffron by Paradise in the Kelvinbridge Quarter, It used to be a run-of-the-mill Iranian restaurant called Paradise and it had a weird waterfall in the windows with always made me pass water for some reason.

The restaurant was taken over by an enterprising Persian chap who reinvented it as a Persian bistro, he made it trendy by adding statues of Perian mythology and the Persian sun-god Mithra.

We walked in at Iftar time and were greeted by a lovely vibe and ambiance, and full of pretty young things.

Mokee Foodwala and I were absolutely famished so we dove right into the Persian Meze. 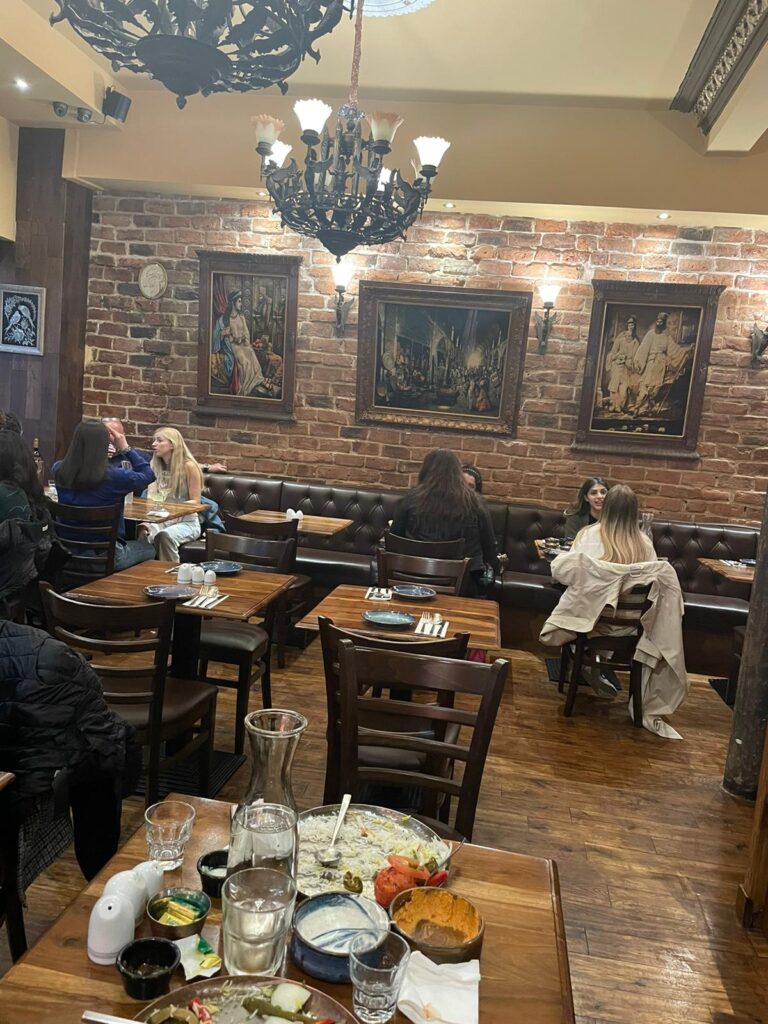 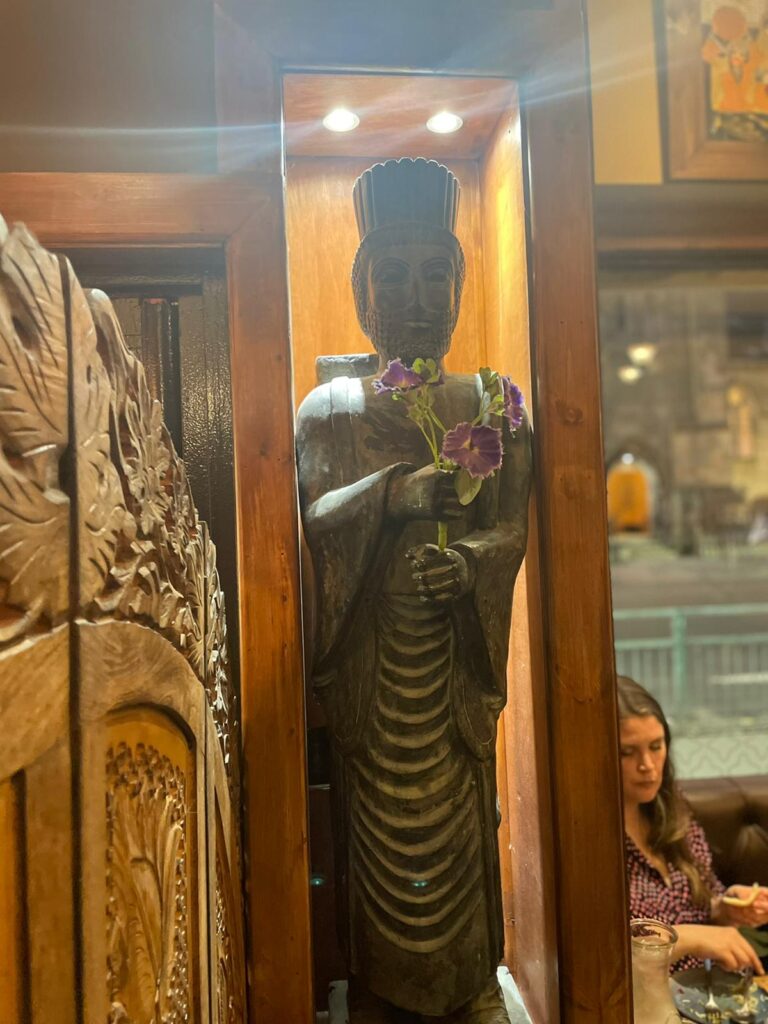 The Red Pepper Hummus was deliciously creamy with roasted red pepper folded into the tahini and Channa, delicious.

The yogurt Moosir dip was balanced with garlic and walnuts and the perfect viscosity for it to be scooped up with the piping hot nan.

The Persian Batata Harara was triple cooked so it was crispy on the outside and piping hot and fluffy inside, the sumac seasoning was on point without being overpowering.

The Koubideh Kabab was up next,  Koubideh is made from ground lamb or beef or a mix of both. It simply translates to slammed kabab, because of how it was made traditionally in the past. The meat was placed on a large stone and got smashed with a wooden mallet

If I was honest it was good but definitely not the best, It was well seasoned but a wee bit dry and it was missing the trademark smokiness, possibly because it was made on a gas-fired robata, as opposed to a far more difficult to used coal robata.

Joojeh kabab is a quintessential  Persian chicken kebab. Chicken pieces are smothered in a delicious saffron and olive oil paste and grilled on a robata, this simple dish separates the cooks from the chefs if the chicken cubes are cooked a few seconds longer and the diced chicken becomes rubbery, cook a few seconds too little then it is a health hazard.

The Mezze was fresh and flavorsome expertly prepared, could not fault

The Grilled mains were again delicious, the  Koubideh would have been even more delicious if it was prepared on a charcoal robata, but that is just a minor point, the Joojeh Kebab was slightly under-seasoned for my taste but was grilled on point.

The Service was perfunctory, neither excellent nor poor, it was just functional.

The Koubideh Kebab was definitely the star of the show

It would be unfair to say the Joojeh was the “miss”

So how did Saffron compare with its Persian peers?

The Two best Persian restaurants in London so far have been Patogh off Edgware Road and the sublime Berenjak in Soho.

Further afield the best I have visited has been Persopolis in Beijing! and the sublime Special Kebab in Dubai.

While Saffron was excellent for Kelvinbridge Quarter, Glasgow, but way behind its more cosmopolitan brethren.

The Chicken, Beef, and Lamb are confirmed 100% Halal

NO Pork is served on the Premises

Hey, Foodwala’s… Alfie Foodwala is back with a vengeance after the Ramadhan sabbatical and I have some amazing restaurants lined up in the coming month so stay tuned inshallah.

As you know your Alfie Foodwala has a number of passions other than restaurants and food, Alfie is also passionate about cars! especially vintage post-war European Marques and Restomods.

Alfie Foodwala  decided to break bread with fellow petrolheads,  Mokee and Goblee Foodwala’s  and continue our conversation of whether the  Singer Porsche 911 restomod (www.singervehicledesign.com) is better than the Porsche 911 restored by Tuthill Porsche (www.tuthillporsche.com)

As you can see the Singer Porsche is heart-achingly beautiful, the level of artisan craftsmanship is mind-blowing and can only be appreciated by someone with taste and sophistication whereas the Tuthill Porsche is aimed at the everymen.

We can liken the  Singer Porsche with the sublime Osteria Francescana restaurant in Modena and voted the worlds best ( www.osteriafrancescana.it) and the Tuthill Porsche as the Locanda Locatelli (www.locandalocatelli.com), both are amazing Italian restaurants but the Osteria in the hands of the Maestro Massimo Bottura is in a different animal.

We arrived at the Italian KItchen on a beautifully sun-drenched Sunday morning and the Merchant City looked like downtown Milan.

The focaccias were both freshly baked in the wood-fired pizza oven and were light and pillowy soft, the olive oil was infused into the dough giving a delicious rustic flavour.

As you know from previous posts your Alfie Foodwala is a rice fanboy and in opted for the Seafood and Olive Risotto, as you know the Arborio rice is notoriously difficult to master and the moisture content has to be just right to achieve the chalky al dente texture, otherwise, the rice gets mushy and loses its  integrity, my risotto was on the dry side and could have done with a wee bit more jus.

The Funghi Tagliatelle was delicious, the foraged mushrooms were suated in slivers of garlic and tossed into the creamy tagliatelle, the homemade tagliatelle was fresh and had a bite to it…just right.

Mokee Foodwala opted for the Spanish, roast pepper and ricotta Tagliatelle which was tossed in the house sugo al pamodoro (tomato sauce), In Italy, every mom and every chef have their own recipe for sugo and some recipes have been handed down over generations and are closely guarded secrets.

Due to Eid, we decided to treat ourselves to some desserts, we firstly opted for the Blueberry Cheesecake, the Blueberry soft cheese filling was delicious, it was creamy yet had a slight blueberry bitterness which gave a nice edge to the sweetness.

Next up was the eponymous Creme Brulee, it is the hardest simplest dessert to get wrong, the custard can me too lumpy or too runny, this one was good but not as good as the Crema Caravan in the Arches.

In Conclusion, The Italian KItchen was certainly competent, it had all the elements in the right place and the service was attentive, however, it lacked the Je ne ce quoi and charisma that an owner-operator provides, like in the  La Lanterna in Kelvinbridge or Eusebis in the West end.

Alas the Chicken and Lamb are not Halal and white wine is used extensively however the dished are cooked fresh so the wine can be left out if requested.