Hey, Foodwala’s…welcome to another tale of the trials and tribulations of Alfie Foodwala.

I have been busy judging amazing luxury hotels the length and breadth of Scotland for the Prestige Hotel Awards.

It has been a time of absolute wonder, the beauty of the west of Scotland is breathtaking, the mountains are majestic in their winter clothing, the lochs are serene in their elegance.

I have met passionate hoteliers and restauranteurs, who are creating magic with locally sourced ingredients.

I was eating a Halal Angus steak, which a certain hotelier had made a 200 round trip to purchase from a renowned Glasgow butcher and I discovered that the cattle were bred in the farm 300 yards from the hotel.

I appreciate the hospitality shown by the hotelier who not only sourced the Halal steak but also made sure that it was local, thus not compromising their vision of locally sourced ingredients.

I encountered this dedication and vision in the summer of 1984, I was in the darkest deepest Toba Tek Singh and I was with my grandfather and we were visiting his friend who was the local feudal landowner and the Chief Minister of Punjab.

We met at his farmhouse and the Chief Ministerwala showed us around his expansive farm but he lamented that his cattle looked emaciated, their coats were dull and the pin bone protruded from their hindquarters.

The C Mwala asked my grandfather why his imported Australian Brangus cattle looked proud and majestic, their coats shining and their size put local cattle to shame

My grandfather explained that you have to love your beasts, the feed should be the best possible, the cattle must be allowed to dip in their own plunge pool twice a  day in the summer.

In the winter nights, the cows must sleep in a heated barn, each cow must be brushed and massaged after their pool dip hence why their coats were shiny.

The beats were allowed to roam without hindrance and he never used barbed wire so that their coats would not be damaged or caused any pain.

Misha Zelman opened Zelamn meats in Soho so that he can properly honour his beasts who he raised so that they can provide sustenance for rich Londoners, my grandfathers, and Mr. Zelman’s passion and determination put the Vegan argument on its head.

Zelman Meats is a quirky take on the traditional steakhouse and the steak has the pride in place, from the prominent dry-aging cabined to the glass-fronted kitchen so that the cattle are honored for their sacrifice. 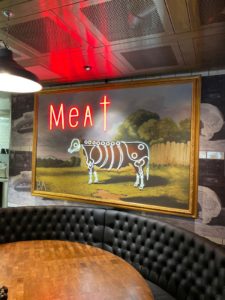 Mokkee Foodwala, Freud Foodwala and I kicked off the proceedings with the Beef Carpaccio, This is the acid test for a steak restaurant, the raw beef is cut thin as silk and then dressed with virgin olive oil and parmesan cheese, the carpaccio is an unforgiving dish, the beef has to be the absolute best and the taste actually comes from the marbling.

This was absolutely delicious, the paper-thin beef was melt in the mouth, the crispy shallots, and balsamic gave an additional nuance.

The light and crispy Tiger Prawns hit the spot, but what really caught my eye was imaginatively named the “holy f**k” mayo, apparently its the Zelman blended house mayo and it was creamily tangy and hot, an excellent accompaniment with the prawns.

The Canadian Lobster Croquettes were morish and tasty, there was actual meaty lobster in them, rather than some substitute which is the case with other establishments, the lobster mayo nailed it!!, I could have a plate of lobster mayo and triple cooked chips all day long.

The main event did not disappoint, both steaks were cooked medium rare to showcase the meat, the marbling on the Rib Eye was nutty and buttery, the meat itself was juicy.

The sirloin also was cooked medium-rare,  the meat was tender and soft and absolutely melt in the mouth, with a gorgeous crust on it.

The steaks were accompanied by the absolutely decadent black truffle chips, the crispy chips were drizzled with rock salt and shaved truffle, what a delicious flavour combination

Top marks for Zelman, the starters and steak was simply delicious, the menu was innovative and highlighted each steak area, each dish was executed with care and finesse

the meat sweats are worth it!!

In my opinion, Zelman Meats was above excellent, yet slightly behind the superstar steak restaurants likes of  Seafire, Dubai  but better than  Nusr-Et Dubai

The Australian and Canadian Beef is  certified  HALAL,