Hey, Foodwala’s… A funny thing happened to me on the way to foodwala prospecting the other day, I was in the Fodwala mobile and I was listening to the  William Prince song Breathless, its an amazing soulful country and western song and I actually had the most darndest out of body feeling.

I had the most vivid feeling that I was driving in a Jalopy along the great grassy plains in  West Texas with this song on the radio, and the dark pregnant clouds promising rain in the distance

I have not been to Texas yet but the feeling was so vivid that it literally left me breathless.

When I told Mokee Foodwala of this he sagely remarked that possibly in my previous life I was a cowboy from Texas.

All this Halcyon Texan Melancholy left me wanting some low down southern fried chicken and I just happened to spot Absurd Bird just opened in Nelson Mandela Place.

As the Foodwala family walked in it felt we had walked into a Honky Tonk Roadhouse somewhere near San Antonio, Texas.

Johnny Cash was belting out the Boy named Sue in the background and the queen of country Dolly Parton was immortalised on the walls.

We kicked off the proceedings with the BBQ platter of Buffalo flavour chicken wings and chicken tenders, the chicken was moist, tender, messy, flavoursome and any other adjective you can associate with delicious fried chicken.

The coleslaw was creamy and crunchy and the onion rings were oniony sweet and crispy.

Next up were nine fried Chicken tenders slathered in a tobasco  BBQ sauce and accompanied with blue cheese dip, mustard mayo and my favourite lemon and parmesan.

The tenders were amazingly… well tender and the tobacco BBQ was the right balance of heat and tangy and when dipped into the cool cheesy dips it made the taste buds sing the Travis Tritt song Its great to be alive!!

The chicken was marinated in buttermilk for 24 hours before dipped in the breadcrumb and cooked twice, the fried chicken had a gloriously golden crust on it, which was perfect for picking it apart with your fingers and dipping in the BBQ gravy, the chicken itself was so tender but it was practically flash  cooked by super hot steam in the batter and the breast meat was soft, silky and tender.

Tep Zepi Foodwala opted for the messy fried chicken burger, it was a layer of fried chicken and pulled chicken with hot cheese, sandwiched in a buttery brioche bun, It was the messiest burger ever but when Tep Zepi got down to business he remarked it was delicious while devouring the burger.

Moksters Foodwala continued the burger train of thought and hungrily went for the Nashville hot Burger, the fried chicken was smothered in the Absurd Xtreme hot sauce and tempered by the harissa mayo, gherkins and fried onions.

Mokee mumbled something about it being so good while the hot sauce and mayo dripped down his chin.

Bakree and Rarri Foodwalee’s reluctantly chose the Chicken Ceaser wrap after their first choice of chicken sliders were not available, they felt the fillings were boring and heavy on the salad element and could have been better if the chicken was spicy to counter the sweetcorn Ceaser salad.

They were not impressed, unfortunately.

I decided to Mollify the Diva Foodwalee sisters with some sugar, we ordered the most amazing Crack Pie, it was the sweet pie with toffee and clotted cream, I now know where it got its name…so addictive!!!!

The other two desserts were not bad but nothing compared to the Crack Pie.

In conclusion, Absurd Bird did exactly what it said on the tin, the Deep south food was delicious, messy and flavoursome.

It best to visit Absurd with close friends or family because the food is very hand on and you don’t want to hold back out of politeness or protocol. 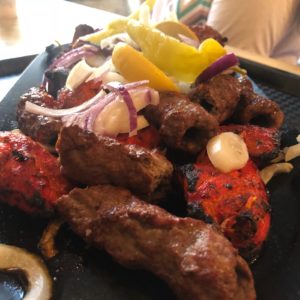